Although it would be tempting to place all blame on Plato (ca. approx. 424-348 BCE) for the idea of the Muses and the power of divine inspiration, he inherited the emotive power of those beliefs from his culture.

I don’t yet know of anyone who was raised to think that writing is primarily a cognitive and behavioral process we can consciously control.

Perhaps that day will come; perhaps the process movement will one day supersede the romantic mythology we’ve been taught to believe is true about writing.

The romantic legacy stems from the influence of the Ancient Greeks, whose belief in the idea(l) of divine inspiration and reliance on one’s Muse was appropriated by the Romantics in the 1800s, and, over one hundred years later, the Expressivists who were, arguably, neo-Romantic in their emphasis on individual ‘voice’ and the need for self-expression.

Hesiod (ca. 750-650 BCE) was the first we know of who wrote about the Muses. Apparently, he encountered them one day while herding sheep. According to Hesiod, the Muses ‘appeared to him,’ inspiring him to become an oral poet.

Although the Romantics would have thought some of my own teachers (who taught from the models of neo-historicism or psychological theory) to be rather bloodless in their need to deconstruct texts—picking apart each word, looking for hidden meanings, attempting to ‘locate’ the text, contextualising it, and placing it at a specific moment in history—I rather suspect the Romantics would have loved the Expressivists, who taught us to ‘let it all hang out,’ encouraging us to explore nature and write a lot of freeform poetry, preferably while sitting in the middle of a forest. 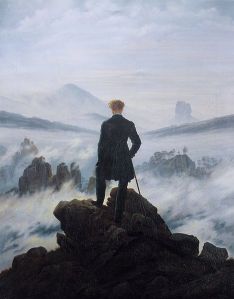 The message from this painting by C. D. Friedrich sums up the Romantic ideal; the individual faces the tempestuous sea (symbolising his emotions). The individual, dwarfed and alone against the power of nature, is the controlling trope of Romanticism, a concept that affects writers even now.

Unfortunately, the Romantics taught us to believe that we do not, cannot, and most importantly for self-discipline, should not expect to have control over our writing.

The Romantic period endured from approximately 1790 to 1840, at which time the rise of Industrialism and Scientism overwhelmed the poetic vision, forcing it, to some extent, underground into the collective subconscious.

Writers of that period were captivated by the idea of being swept away by emotion, passion, and forces that lay outside the self. This idea, that one’s emotional nature should overwhelm the individual, leaving us ‘helpless’ against the whims of ‘our Muse,’ continues to permeate our beliefs about writing and writers.

To the extent that we continue to buy into Romanticism, we perpetuate their attachment to drama at the expense of following a schedule, while we wait for ‘our’ Muse to wander through the inner pastoral landscape, and for creative inspiration to strike us with the power of Zeus’ lightning bolt.

That writers of the Romantic period latched onto the emotive appeal of the feeling of loss of control does not help today’s writer, who has the opportunity to integrate cognitive-behavioral, psychological, scientific, and postmodern beliefs about writing.

Today’s writer has the responsibility of using research currently available about how the brain works. It’s my belief that this research will help us eliminate a few fears and doubts that stem from lack of knowledge about our potential. Not all fears and doubts about one’s skills or abilities as a writer can magically be eliminated by research, of course, but for the first time in history, we’re free of the emotive power of the Muse, if we choose to be. Research into the creative process encompasses a number of areas, including psychological insights into how creation works, and where the creative force emanates from.

Neurological and psychological research attempts to understand and explain cognitive and behavioral elements of the writing process. In his book Creativity and Madness: New Findings and Old Stereotypes (Johns Hopkins University Press, 1990), Dr. Albert Rothenberg explains what he calls the “Janusian Process,” which he contends lies at the core of the writer’s cognitive process. He named this “creative cognitive sequence” after the Roman god Janus, overseer of doorways and transitions, because it sums up the necessary ability to see antithesis as logical, which is a crucial element of creativity.

The essence of the Janusian process is that it encompasses ideas that, on the surface, seem automatically illogical and antithetical. In other words, the person having these thoughts is tying together a number of otherwise disparate ideas to come to a synthesis that we have been taught to think of as creative inspiration, a mystical phenomenon that has long defied explanation.

He claims that although this process seldom appears in the final artistic product, it occurs at critical points along the way.

Janus, the Roman god of transitions, doorways, beginnings and endings. He represents the ability to embrace dichotomy and oppositional beliefs.

Contrary to the romantic notion that creativity grows largely out of inspiration, the Janusian process is conscious and entirely rational.

“The janusian process lies at the heart of the most striking creative breakthroughs . . . multiple opposites or antitheses are conceived simultaneously, either as existing side by side or as equally operative, valid, or true.”

In an apparent defiance of logic or physical possibility, the creative person consciously formulates the simultaneous operation of antithetical elements or factors and develops these formulations into integrated entities and creations.

“The conception contains opposing and antagonistic elements that are experienced and understood as coexistent.” It leaves the mark of “implicit unexpectedness and paradox” on one’s work (15).

Dr. Rothenberg’s findings indicate that there is no mystery (hence, no romance) to this process. Instead, it makes sense for the writer to think in terms of synthesizing influences. Once you break this cognitive process down into its component parts and understand how it works, the idea that we should wander through life waiting for inspiration to strike feels pointless.

Instead, what Rothenberg and other researchers show is that synthesis of ideas comes from looking at ideas from all different perspectives. Focusing on writing as a cognitive and behavioral process offers us the responsibility to read more frequently, to talk to others; to spend more time thinking, and to work with more conscious awareness of our own process. The goal is self-reflexivity, and bringing our previously unknown ‘romantic’ depths to consciousness. 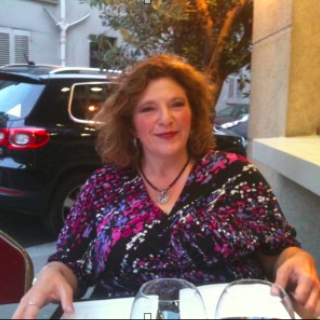